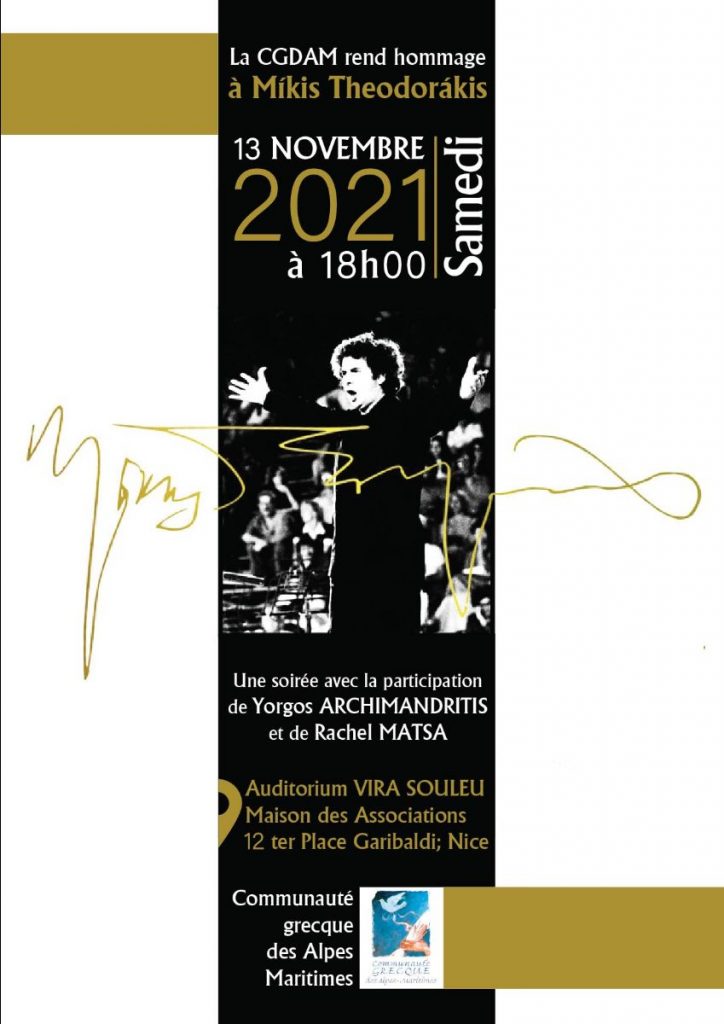 With Yorgos ARCHIMANDRITIS
and the participation of concert pianist Rachel MATSA

Mikis Theodorakis is one of the greatest composers of the 20th century who broke new ground by combining the Greek musical tradition with Western symphonic music. He has composed numerous works for movies, ballets, oratorios and concertos, and has put into music the greatest poets, from Elytis to Neruda, from Ritsos to Lorca. Resistant, he fought the German Occupation as well as the junta of colonels, and his engagements earned him prison, torture and exile.

He always dreamed of a Greece whose influence has never weakened for two thousand years, and everything in his journey tends to remind the Greek people that democracy and culture should be the Nation’s pillars.

This exceptional destiny will be told to us by Yorgos Archimandritis, author of “Mikis Theodorakis by himself” (Actes Sud) / Mikis Theodorakis- “My Life” (Editions Patakis). The tribute evening to the great Greek composer will feature photos from his personal archives, often unpublished audio-visual documents and testimonials from famous personalities whom he has met throughout his prestigious career.

It will highlight the common thread of the philosophy of this legendary man who, through his immense artistic work, the suffering endured and his struggles for more tolerance and union, embodied the destiny of contemporary Greece, his quest for freedom and the affirmation of its cultural destiny.

Writer, author of cultural radio documentaries and journalist, Yorgos Archimandritis has a Doctorate in Comparative Literature from Paris-Sorbonne University. The book “Mot à Mot” that he co-authored with Danielle Mitterrand has been published by “Les Editions du cherches-Midi” and his books “Mikis Theodorakis by himself” and Theo Angelopoulos “Le temps suspendu” have been published in France by Actes Sud editions, as well as in Greece by editions Patakis which also published his book “Mélina – Une star en Amérique” on actress and politician Melina Mercouri. In 2008, he was appointed Cultural Ambassador of Greece during the French Presidency of the European Community. In 2010, he was named Chevalier in the Order of Arts and Letters and, in 2019, he was promoted to the rank of Officer in the Order of Arts and Letters. In December 2020, he was appointed Cultural Ambassador of the Hellenic Foundation for Culture in Paris.